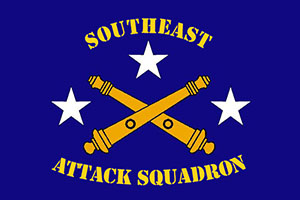 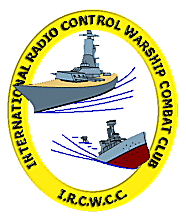 ABOUT SAS
SINCE PHOTOS OFTEN TELL THE STORY 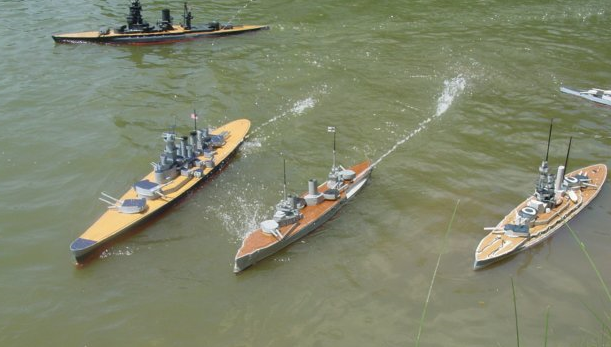 INCOMING FIRE!
Here the USS North Carolina (at left) fires a BB from her bow sidemount cannon into the side of the SMS Konig (middle) as seen by the splash of water against her hull. That shot will penetrate just below the waterline and hasten her sinking (notice the Konig is already pumping water out her stern from previous damage!)

AND EVENTUALLY THEY SINK! 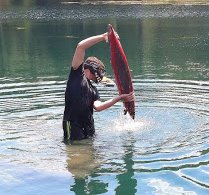 Once a ship has too many holes the incoming water overwhelms the onboard pump and down they go. But even sunken warships are easily recovered, patched, and ready to go again in 30-40 minutes
(Here Captain Minton pours water out of his sunken HMS Invincible).

BUT ITS NOT ALL ABOUT BATTLE...

We also enjoy time between battles chatting and working on our ships with friends.
FREQUENTLY ASKED QUESTIONS
Do you really spend that much time building the models just to destroy them?
The ships are not destroyed. The BB's make holes in the balsa sheeting the sides that lets water in until the ship sinks, but that is easily patched to go out and battle again. The electronics are waterproofed (commonly by coating in SkotchKote or conformal spray) so nothing is really destroyed when sinking.
How do you recover the boats?
We typically only battle in ponds that are at most neck deep (so we wade out, pull them up, and bring them to shore to patch). In deeper water small floats or fishing bobbers are tied to a ship with line so that when the ship sinks it is obvious from the bobber where the ship is so it can be easily recovered).
Do you use aircraft [or submarines] in battles?
We do not have aircraft. Our hobby is primarily aimed at gaming naval surface combat (and planes would have only ~4" wingspan at our scale. hard to build R/C models that small, lol). There are aircraft carriers (and tankers, freights, etc.) we pull out for a "convoy protection" scenarios we sometimes play, but aircraft are not part of combat.
Similarly, submarines are also rather small at our scale but some have been built as convoy ships, and one or two have been built with an armed deck-gun ("fire and dive"). Due to small size and complexity this is NOT a project for a beginner in the hobby.
How much does it cost to build a ship?
This can vary with the size of the ship, but typically one might expect to spend ~$600 building a new ship. Often easier is to buy a used ship from someone already in the hobby and "refit" it for combat with fresh parts.
What is a good ship for a beginner?
It's generally thought that a 3 unit heavy cruiser or 4 unit battle cruiser are good ships to begin with. The larger ships cost more and have more parts to adjust before battle, and the small ships are actually more difficult to build and "tipsy" if weight is not handled just right.
Where can I get a ship?
The main commercial supplier of ships and components is Battlers Connection. Another good way to start is to contact a club member or ask to get on the club's email list and see if anyone has a used ship to sell (either fully-functioning, or built but only needing a "refit" to be battle ready again).
How can I get help building a ship?
SAS has an email listserve where members chat (and are eager to offer tips and help). In several areas captains get together periodically just to work on boats together (particularly when there is a new captain)
How do I join? How do I get into this hobby?
In order to participate (battle) a captain must be a member of International R/C Warship Combat Club ($10), which does also require membership in the North American Model Boat Association ($50 - NAMBA provides our club insurance).